It’s no secret by now that I LOVE listening to audio books. I am especially keen on listening to them in my car on my iPhone though my Audible.com app.  I just recently read Inkheart by Cornelia Funke and I was SMITTEN. So smitten in fact that I dragged out the end as long as I could. 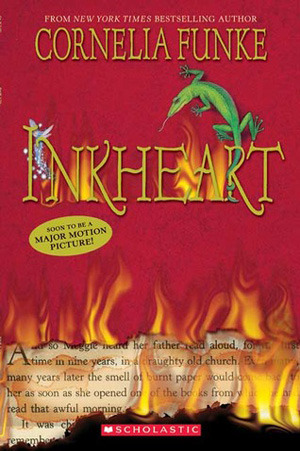 Surely you’ve done that too? Prolonged the ending because you don’t want to finish the book? What’s even a more compelling reason to not finish a book is if the reader is phenomenal. The reader of Inkheart is Lynne Redgrave and OH does she bring the characters to life! Here’s a little bit about Inkheart:

Twelve-year-old Meggie learns that her father, who repairs and binds books for a living, can “read” fictional characters to life when one of those characters abducts them and tries to force him into service.

Characters from books literally leap off the page in this engrossing fantasy. Meggie has had her father to herself since her mother went away when she was young. Mo taught her to read when she was five, and the two share a mutual love of books. He can “read” characters out of books. When she was three, he read aloud from a book called Inkheart and released characters into the real world. At the same time, Meggie’s mother disappeared into the story. This “story within a story” will delight not just fantasy fans, but all readers who like an exciting plot with larger-than-life characters.

Inkheart is for anyone who loves books. Anyone who eats, sleeps, and breathes books because they love them so much. All of your odd bookish habits would not seem so odd if you shared them with Meggie; she has her own way of behaving towards books.  It’s like they’re in your mind behaving as you would behave.  Lynne Redgrave and Funke (the author) create a world that envelopes you like a literary hug and stays in your brain long after you’ve stopped listening to the book.  The characters became people with feelings you could predict and villains you could hate.

I encourage everyone who loves books to read this one. You’re never too young or too old to get carried away by good writing. This writing is good. Exceptional.

And I pity the fool who reads Tinkerbell out of Peter Pan, don’t you?  Have you read Inkheart? What about any of the followup books?