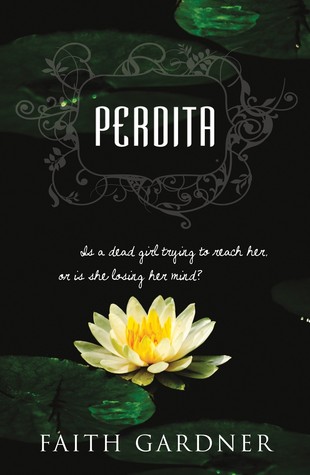 I was pleasantly surprised at how much I enjoyed Perdita by Faith Gardner!

Granted, Arielle has a vast, excitable imagination. But she’s not imagining how strange and out of control her life becomes after the death by drowning of her older sister’s best friend, Perdita. Not only does this death echo the death of Arielle’s own older brother, ten years before, it leads to dreams and visions in which Perdita seems to be reaching out to Arielle, asking for her help. The only other explanationâ€”that Arielle’s high-strung emotions have finally caused her to break with realityâ€”is even more terrifying. A story that builds to greater and greater heights of suspicion and fear, Perdita is also a multi-layered literary achievement that leaves no emotion untouched.

Yeah so, I wasn’t too sure what to make of the story after reading the blurb. But early on I decided I liked Perdita. Â I also liked the dynamics between the two sisters. Â One is leaving for college and since a similar situation happened to our family I thought it might be interesting to see how the child who is left behind feels. I like the way the author helps you uncover why the sister, Arielle sees ghosts. Â Totally plausible without falling into fantasy realm.

Not much in the way of diversity in this book; although the family does lose a child to a swimming accident and they still mourn his loss, which again, totally plausible.

I liked it! Teens and young teens probably.