CYBILS Award review: While We Run by Karen Healey 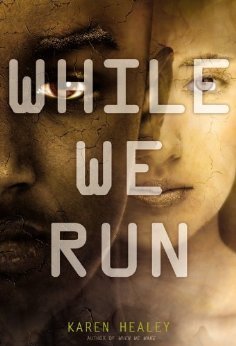 OMG I’ve never read anything like While We Run before! The cover is so breathtaking I can’t stand it! The superimposed images of a white girl and a black boy are amazing. I couldn’t wait to dig into it.

Abdi Taalib thought he was moving to Australia for a music scholarship. But after meeting the beautiful and brazen Tegan Oglietti, his world was turned upside down. Tegan’s no ordinary girl – she died in 2027, only to be frozen and brought back to life in Abdi’s time, 100 years later.

Now, all they want is for things to return to normal (or as normal as they can be), but the government has other ideas. Especially since the two just spilled the secrets behind Australia’s cryonics project to the world. On the run, Abdi and Tegan have no idea who they can trust, and when they uncover startling new details about Project Ark, they realise thousands of lives may be in their hands.

A suspenseful, page-turning sequel to When We Wake that will keep readers on the edge of their seats and make them call into question their own ideas about morality – and mortality, too.

Yeah, so you gotta love a book that opens with a former Beatles’ member song, right? Who doesn’t love George Harrison’s Here Comes the Sun, right? Yeah so Abdi has a beautiful singing voice and moves to Australia (why?) to study music. Then he meets a girl, Tegan who died in 2027, was cryogenically preserved and brought back to life in the future. Abdi’s future.

There’s so much going on in the book that I found it confusing. First, I love and don’t love that the characters live in another continent. I mean, who KNEW that Australians think about the future like we do? Yeah, I didn’t so it’s both interesting and bizarre at the same time because I have no frame of reference for Australian YA.

So the bad guys want to send people into space to be their slaves in the future. But Abdi and Teagan are part of a revolution to thwart this project.  Aside from this confusing bit, the adventure is good; hiding from the bad guys and survival, all stuff that good spec fic is made of.

Except it’s not till sometime in the book you figure out that this book is a companion to When We Wake. Whuuuuut? Well that explains alot of why I was confused half the time. There’s information I didn’t know because you learn this in the FIRST book!

I’m not going to get angry because we all know I’ll be the first to start a series after the first book and read them backwards and out of order just because that’s how I roll. Call me crazy. But for judging a book for an important contest like CYBILS it would have been helpful to know the backstory.

So. I didn’t love it. But it’s important because the cover is #diverse and it’s also about a lifestyle I know nothing about; Australians and Africans.

Check it out and see for yourself.

This could count as a  Diversity Reading Challenge title!