I was drawn to Conjure by Lea Nolan because it sounded like a girl’s girl kind of book: 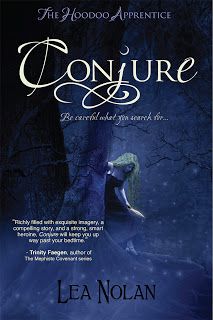 You know I love a book about a strong girl and girl power.  I don’t mind love stories so much as I need the girl to have a brain of her own even if she does like boys.  (I suppose somewhere I’m still 12)  That’s where Emma Guthrie comes in.  She’s a young teenager with a twin brother.  Their best friend has grown into a hottie and she can’t stop her growing feelings for him.  So here’s where it gets fun; They live in South Carolina in the lowcountry area that’s famed for its Gullah population.  The Gullahs were originally brought over as slaves and stayed in the area long after emancipation.  This culture is known for its belief in certain types of magic, called hoodoo, not to be confused with voodoo.

What’s so fun about Conjure is that she explores the Gullah and the hoodoo culture and we become experts on the subject while having fun! This book is rare because the African American characters drive the story and are not merely sidekicks.  I can already picture the stern but lovable Miss Delia in my mind’s eye.  She looks alot like Cicely Tyson from Because of Winn Dixie.

Miss Delia is a tough old broad and looks a little crazy but full of love.

So, not only does Nolan make Miss Delia a driving character, Maggie, who is Jack’s love interest, is also African American and none of that seems to make a bit of difference to anyone in the story.   I love it!

Another thing I love about the story is the use of the hoodoo. To be sure, I don’t like to be scared and one evil character in particular scared the wits out of me. It was Sabina and here’s how I pictured her to look:

This nice lady here is an example of how the Gullah might have looked back in the day.  Now imagine her all angry and menacing and chanting spells.  She even scared a bunch of pirates!

Did I mention pirates? You gotta love a book that has pirates, right?

So no more blah blah blah from me.  Read the book and find out about Emma, her love interest and WHY the title is called Conjure.

And maybe sleep with one eye open.

Just in case a boo hag is coming to get you.

I give this book four paws not just because I’m scared of someone putting a curse on me but because of the full complement of African American characters in the book.