If you’re a little too old for Young Adult titles

but not ready to commit to Adult (not that kind) Fiction,

I’d like to share a preview with you of a couple of fun books from this genre by Daria Snadowsky: 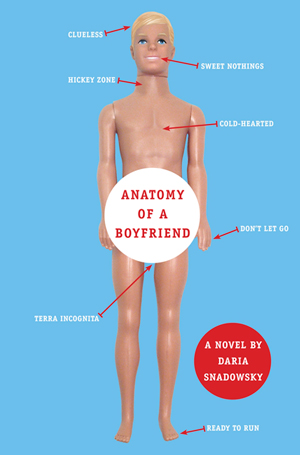 Anatomy of a Boyfriend

Before this all happened, the closest I’d ever come to getting physical with a guy was playing the board game Operation. Okay, so maybe that sounds pathetic, but it’s not like there were any guys at my high school who I cared to share more than three words with, let alone my body.

Then I met Wes, a track star senior from across town. Maybe it was his soulful blue eyes, or maybe my hormones just started raging. Either way, I was hooked. And after a while, he was too. I couldn’t believe how intense my feelings became, or the fact that I was seeing—and touching—parts of the body I’d only read about in my Gray’s Anatomy textbook. You could say Wes and I experienced a lot of firsts together that spring. It was scary. It was fun. It was love.

And then came the fall.

Daria Snadowsky‘s unflinching dissection of seventeen-year-old Dominique’s first relationship reveals the ecstasy and the agony of love, and everything in between. 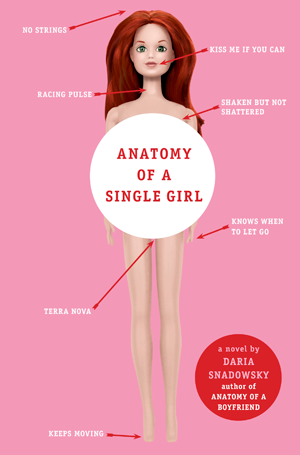 Anatomy of a Single Girl

After everything that happened—my first boyfriend, my first time, my first breakup—jumping back into the dating game seemed like the least healthy thing I could do. It’s not that I didn’t want to fall in love again, since that’s about the best feeling ever. But as a busy college premed still raw from heartbreak, which is the worst feeling ever, I figured I’d lie low for a while. Of course, as soon as I stopped looking for someone, an impossibly amazing—and devastatingly cute—guy came along, and I learned that having a new boyfriend is the quickest way to recover from losing your old one.

The moment we got together, all my preconceptions about romance and sex were turned upside down. I discovered physical and emotional firsts I never knew existed. I learned to let go of my past by living in the present. It was thrilling. It was hot. It was just what the doctor ordered.

But I couldn’t avoid my future forever.

In Daria Snadowsky’s daring sequel to Anatomy of a Boyfriend, eighteen-year-old Dominique explores the relationship between love and lust, and the friendships that see us through.

Sounds fun, huh?  Remember those Judy Blume books you used to hide and read when you were a teen?

Did I mention you can build your own boyfriend?

While I’m a little too married to have a boyfriend, if I had to design one he’d hafta be strong enough to take out the trash, kill the spiders, and climb on the roof to rescue stray kittens. I named him Biff. 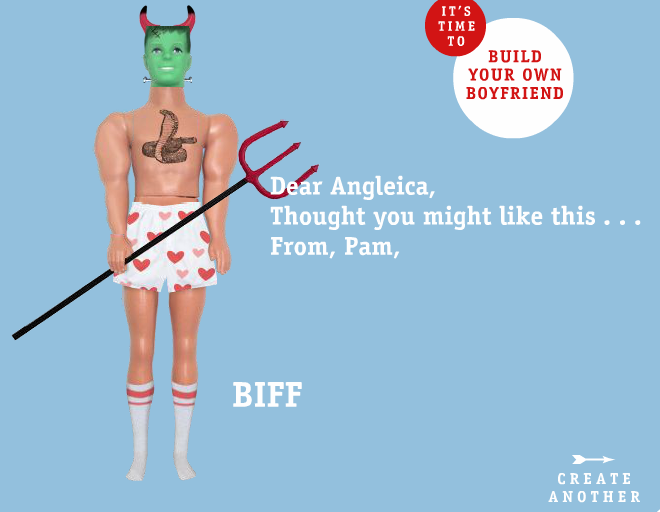 Cute, huh?  I thought maybe he could take that bad boy pitchfork and work in the yard.

Hey, I’ve got a BRILLIANT IDEA!!

Let’s all make boyfriends and pin them in Pinterest, shall we?