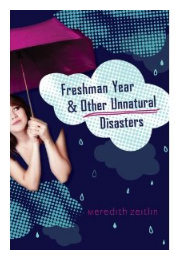 Freshman Year and Other Unnatural Disasters by Meredith Zeitlin

Let’s say you’re fourteen and live in New York City. You’d think your life would be like a glamorous TV show, right? And yet . . . You don’t have a checking account, much less a personal Black American Express card. You’ve never been to a club, and the only couture in your closet is a Halloween costume your mom made from an old laundry bag.

In other words? You’re Kelsey Finkelstein – fourteen and frustrated. Every time she tries to live up to her awesome potential, her plans are foiled. Kelsey wants to rebrand herself for high school to make the kind of mark she knows is her destiny. But just because Kelsey has a plan for greatness . . . it doesn’t mean the rest of the world is in on it.

Kelsey’s hilarious commentary and sardonic narration of her freshman year will have readers laughing out loud – while being thankful that they’re not in her shoes, of course.”

If I were a teenager today I would probably be a lot like Kelsey Finkelstein.  Or at least want to be her friend.  The fourteen year old heroine in Freshman Year and Other Unnatural Disasters, by Meredith Zeitlin is an endearing young lady with an acerbic wit and a knack for laughing off embarrassing moments.  To be sure, Kelsey has a healthy sense of her abilities and what she wants out of life; but not in a bad way.

Unlike many teen heroines, Kelsey does not seek the company of a vampire.  Nor does she use her acerbic wit to verbally attack anyone, unless they deserve it.   Kelsey has never killed anyone, nor has she covered up a murder.  She is not ruthless in her social climbing and doesn’t secret off to an unknown parallel universe.

What Kelsey does do, is get herself into embarrassing situations, much like any normal fourteen year old would.  Kelsey also dreams about boys, dates boys, talks about dating boys, talks with her besties about boys and disobey her parents (to see boys).

I like Kelsey. You can’t help but like her.  Zeitlin infuses the character with just enough positive self esteem to allow the character to laugh at her own flaws but not become so self absorbed that she has no room to consider other’s feelings.  I also like Kelsey because she’s Jewish.  While not so blatantly New York Jewish, like Fran in The Nanny, she’s enough to make her a positive multicultural character.

I would like to have seen a little more of Kelsey’s Jewish customs in the story, other than the quick mention of helping the family write Chanukah cards and a brief mention of cousin Lainie’s upcoming Bat Mitzvah. I feel as if exploring these details a little further would give Kelsey a little more depth, but that is merely my personal preference.

Cheers to Zeitlin for providing a protagonist that appeals to young women of other faiths and ethnicities.  Zeitlin’s Kelsey made me chuckle out loud.  She also reminded me not to insist on too many “mother-daughter” moments because that would be Typical Lame Parent Behavior.

Need an additional laugh? Check out the trailer!

I give this book 4 paws!

*DISCLAIMER: I received this book from the publisher to assist in my review. All opinions are my own.*