Hotlight Spotlight: If You Could Be Mine by Sara Farizan 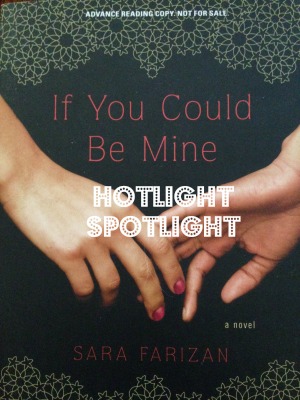 HOLY COW I CAN’T WAIT TO READ THIS BOOK!

If you haven’t heard of it, you will.  Just when you think that all the good literature about life in the Middle East is only for adult readers, here comes If You Could Be Mine by Sara Farizan.

In this stunning debut, a young Iranian American writer pulls back the curtain on one of the most hidden corners of a much-talked-about culture.

Seventeen-year-old Sahar has been in love with her best friend, Nasrin, since they were six. They’ve shared stolen kisses and romantic promises. But Iran is a dangerous place for two girls in love—Sahar and Nasrin could be beaten, imprisoned, even executed if their relationship came to light.

So they carry on in secret—until Nasrin’s parents announce that they’ve arranged for her marriage. Nasrin tries to persuade Sahar that they can go on as they have been, only now with new comforts provided by the decent, well-to-do doctor Nasrin will marry. But Sahar dreams of loving Nasrin exclusively—and openly.

Then Sahar discovers what seems like the perfect solution. In Iran, homosexuality may be a crime, but to be a man trapped in a woman’s body is seen as nature’s mistake, and sex reassignment is legal and accessible. As a man, Sahar could be the one to marry Nasrin. Sahar will never be able to love the one she wants, in the body she wants to be loved in, without risking her life. Is saving her love worth sacrificing her true self?

Amazing, right?  Who knew that being a lesbian in Iran was criminal but sex reassignment is legal?  This is a groundbreaking novel that I’m sure will become beloved, banned, challenged, questioned, etc.  I’m calling it first, folks:

This will be the Young Adult sleeper this fall.

I’m putting this title at the top of my TBR pile!

What about you? Have you read it?