Battle Hymn of the Tiger Mother – WANT GOTTA HAVE 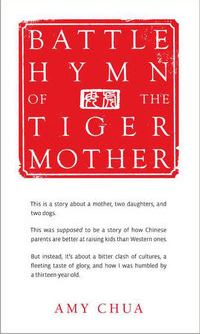 Battle Hymn of the Tiger Mother by Amy Chua has been getting a lot of press lately. And since PammyPam is not one to miss out on a party, I had to check it out.Â  I heard a piece on NPR the other day and the story sparked my interest; in fact, NPR is usually my go to source for book and music recommendations. Chua’s story didn’t surprise me. What surprised me was ALL of the press she was getting on her book. And since no press is bad press, she must be pleased with the attention the book is getting, right?

An awe-inspiring, often hilarious, and unerringly honest story of one mother’s exercise in extreme parenting, revealing the rewards-and the costs-of raising her children the Chinese way.

All decent parents want to do what’s best for their children. What Battle Hymn of the Tiger Mother reveals is that the Chinese just have a totally different idea of how to do that. Western parents try to respect their children’s individuality, encouraging them to pursue their true passions and providing a nurturing environment. The Chinese believe that the best way to protect your children is by preparing them for the future and arming them with skills, strong work habits, and inner confidence. Battle Hymn of the Tiger Mother chronicles Chua’s iron-willed decision to raise her daughters, Sophia and Lulu, her way-the Chinese way-and the remarkable results her choice inspires.

Here are some things Amy Chua would never allow her daughters to do:

* be in a school play

* complain about not being in a school play

* play any instrument other than the piano or violin

* not play the piano or violin

The truth is Lulu and Sophia would never have had time for a playdate. They were too busy practicing their instruments (two to three hours a day and double sessions on the weekend) and perfecting their Mandarin.

Of course, no one is perfect, including Chua herself. Witness this scene:

“According to Sophia, here are three things I actually said to her at the piano as I supervised her practicing:

1. Oh my God, you’re just getting worse and worse.

2. I’m going to count to three, then I want musicality.

3. If the next time’s not PERFECT, I’m going to take all your stuffed animals and burn them!”

But Chua demands as much of herself as she does of her daughters. And in her sacrifices-the exacting attention spent studying her daughters’ performances, the office hours lost shuttling the girls to lessons-the depth of her love for her children becomes clear. Battle Hymn of the Tiger Mother is an eye-opening exploration of the differences in Eastern and Western parenting- and the lessons parents and children everywhere teach one another.

While I haven’t read the book I can already see pros and cons for each argument. Every parent wants the best for their children and naturally sometimes their tactics aren’t always the best; that’s why there’s therapy.Â  Secretly, I have always wanted my children to be prodigies; but have often wondered when children become prodigies, what, if anything, suffers because of it.

Has anyone read it? Thoughts?