My new bestie, Gina, from Mom-Blog, discusses a book that I LOVE, Curious incident (as we call it at work).

In American, in 2012, books continue to be challenged and banned – annually, there is a list of someone, somewhere that is offended by something small in a book.  And I’m not talking about “50 Shades of Grey,” either.  Here is a sample from 2010-2011:

Picked your jaw up off the floor yet?  There’s another book I’m going to add – the only novel I know of that’s written from the point of view of a young man with autism, “The Curious Incident of the Dog in the Night-Time,” by Mark Haddon.  Christopher John Francis Boone is the 15 year old child of single father, his mother having died 2 years before.  He finds a dog’s dead body and becomes the main suspect in its death.  Later, he finds a series of  letters from his mother, and learns what actually happened to her, who killed the dog, and about his father’s deceit.

What I liked about the book is its unapologetic look into a person who thinks differently from the mainstream.  Christopher explains what he thinks and feels clearly and literally.  For example, he titles the chapters after prime numbers: rather than “1,2,3”, he uses “2,3,5,7” because he likes prime numbers.  This book has a different tone and feel than anything else I’ve ever read, and for someone who eats books for breakfast like me, that’s a good thing.

This book was removed from a summer reading in Lake Fenton, MI, in 2010, because of foul language.  I have no idea how old the children were, but this is not really a book for young kids but it would be good for teens and up.

Foul language is everywhere and I believe parents have a right to protect their children from it, not school districts.  That said, this book was on the summer read list in my community and we sold LOTS of copies, so these people who challenged it are not in good company.

I agree with Gina; the boy’s outlook on life is a literal one that sometimes doesn’t make sens to anyone other than himself, but so what? That’s what makes the world special! I  loved the concept of days being certain colors.

Take a moment and go over to Gina’s blog and say hello.  She’s passionate about fighting for the rights of kids with disabilities (I’m still not a fan of that word).  Tell her Pammy Pam sent you! 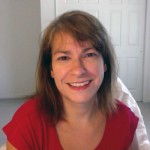 Thanks Gina for the review. Go read the book. NOW.  You won’t be sorry!