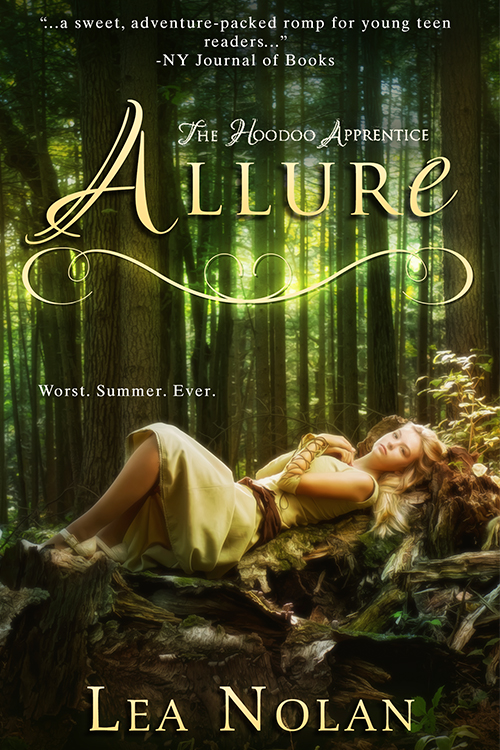 You many not know this, but PammyPam is part of an elite street ninja team called the Apprentices.  We are handpicked for our ingenious skills by our leader, author and head ninja, Lea Nolan.  As part of this elite squad of ninjas, we get to hear the latest news about Lea’s writings.  Lea’s first book, Conjure:

Be careful what you search for…

When a strange girl appears, bent on revenge; demon dogs become a threat; and Jack turns into a walking skeleton; Emma has no choice but to learn hoodoo magic to undo the hex, all before summer—and her friends–are lost forever.

I loved Conjure so much! It’s so refreshing to read a YA book that’s not too mushy and is appropriate for the younger YAs, 12-14.  Here’s my review.  You can imagine I was over the moon when, through a little hoodoo magic, I conjured up an advanced copy of Allure, the sequel to Conjure! Here’s the blurb:

Emma Guthrie races to learn the hoodoo magic needed to break The Beaumont Curse before her marked boyfriend Cooper’s sixteenth birthday. But deep in the South Carolina Lowcountry, dark, mysterious forces encroach, conspiring to separate Emma and Cooper forever. When Cooper starts to change, turning cold and indifferent, Emma discovers that both his heart and body are marked for possession by competing but equally powerful adversaries.

Desperate to save him, Emma and her twin brother, Jack, risk their lives to uncover the source of the black magic that has allured Cooper and holds him in its grip. Face with the horror of a soul-eating boohag, Emma and Jack must fight to resist its fiendish power to free Cooper long enough to join their strengths and face it together, before it destroys them all.

Allure is just as good as Conjure, but maybe just a tad better. You know why?  If you were wondering what boo hags looked like after reading Conjure, you’ll find out in Allure.  And believe me, boo hags are the stuff of nightmares.  I can see why Delia didn’t want the kids to run into any. Scary stuff! Lea Nolan shares her hoodoo knowledge and makes me feel like I’m reading Delia’s book of spells myself!  There are only a few points of contention in the book, which I’ll not share for fear of spoiling, but let’s just say, that the boo hags aren’t the only things that will upset you.  Nolan introduces new characters and eliminates old ones; you’ll be conflicted.  But in a good way.

I can’t wait for the rest of the world to get their hands on Allure so they can love it like I do!

I give Allure 4 paws due to the multi ethnic portrayals and easy relationships.  Add these two titles to your collection.  Girls of all colors will appreciate it!