I’m excited today to present to you Agent Shore, a teen spy.Â  I love spies and pirates, both jobs which a librarian would be great at!Â  Anyway, the title I present to you today is Agent Colt Shore: Domino 29. 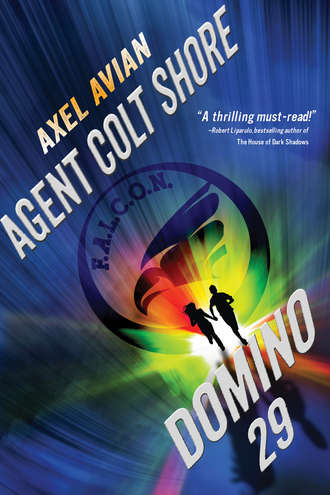 Domino 29 a rousing romp across the globe, kinda like my boy Jason Bourne; traveling from the US to Germany to the Middle East. In fact, the castle Neuschwanstein featured in the book is actually a real place! Click here for the link.Â  I love traveling and while I’ve never been to this castle, I can imagine in my head the many scenes from Domino 29 unfolding in the castle.

Ever wonder what goes on in an author’s head?Â  Find out below:

Q: Where did the idea first come from for Agent Colt Shore?
A: Probably back when I was at school. Heâ€™s always been there for me. Although whilst the gadgets got cooler and I got older, he remained essentially unchanged (except for his wardrobe).

Q: How long have you been writing stories? What other kinds of things have you written?
A: Iâ€™ve been writing as long as I can remember. I mostly write adventure stories, but I like comedy, too. I am trying to work on some film scripts.

Q: What are some of your favorite books & authors? What about favorite young adult books?

A: Itâ€™s really only a one-part question; my favourite books are young adult books. Recently I have been reading Neil Gaimanâ€™s book and Iâ€™m thoroughly enjoying it. Growing up I loved Narnia and Lord of the Rings. I am a fan of Ian Fleming and Bond, of course. Also a book I was recommended called The Messenger, by Marcus Zusak. Non-fiction I am big on comedy, particularly Bill Brysonâ€™s travel writing. Come to think of it, I have rarely read a book that didnâ€™t become my favourite. I loved Harry Potter, too.
Q: Do you have a book that you like to read over and over again…because you know that it will make you feel good after reading it?
A: Casino Royale, by Ian Fleming. Or any Bond Novel.

Q: Do you judge a book by its cover?
A: I might have, once or twice.

Q: Is there some place you’d like to write about? A place you’d like the characters to find themselves?
A: Not so much a where as a when. I have always wanted to write a novel set in a fictional prohibition-era metropolis. This doesnâ€™t mean I am going to put Colt through time travel though! I think they call that â€˜jumping the sharkâ€™. No, thatâ€™s for another character in another world. For Colt, I would like to take him to Chernobyl, I think.

Q: Do movies and books inspire you? If so, which ones?
A: Yes, both. All the books I mentioned earlier, and more. My favourite films are Gladiator, Indiana Jones, and Stardust, which is an adaptation of Neil Gaimanâ€™s book of the same name, directed by Matthew Vaughn.

Q: Do you think future generations will still be readers?
A: Absolutely. Or theyâ€™ll be idiots. But I am sure that will not be the case because at the heart of every movie, game, comic, tv show or whatever is a story and the foundation of every story these days is language. Siri will never be more creative than a human, I donâ€™t think.

Q: You’ve admitted that you’ve worked for an organization like FALCON, in what way is being an author different? Are there ways in which they are 2 sides of the same coin?
A: Being an author is a lot less confidential. I cannot get into too much more detail for the same reason! The stakes are lower, being an author; I feel I only risk letting myself downâ€¦ and Arundel. I suppose they could be two sides of the same coin, the mission objective broadly remains the same, just the execution and target audiences change.

Q: The structure of Domino 29 is different than the other books in the series will be, because it introduces the readers to Colt. Is there anything you can say about Colt’s new adventures? What else does he find out about FALCON?
A: Nothing is set in stone, but I find it incredibly interesting how the new frontline in a nationâ€™s defense is in cyber warfare. Now I, for one, have difficulty synchronizing my calendars across my laptop and smartphone, so I promise you I will not be leading the charge on the cyber battlefield. Nor do I think will any of my friends be. Itâ€™ll increasingly be teenagers and young adults holding this front. I look forward to seeing the first colonelâ€™s commission given to a boy or girl in his or her twenties. Having said this I do not think that conventional espionage is dead. Far from it, and I think Colt is going to find a special relevancy and demand for his aptitude in multiple theatres.

Q: Does Talya come back? What other characters from book 1 will come back in other books?
A: I think I have to have Talya back at some point. She is such a powerful girl and a great counter to Colt.

Q: hat is the most interesting place you have visited & why?
A: Mont Saint-Michel. A beautiful fortified abbey built on a giant piece of limestone jutting out of the coastal flats in Normandy. I love it for its natural and architectural beauty and also its incredibly rich history.

I couldn’t agree more, Axel.Â  The abbey at Mont St Michel is beautiful.Â  I had the pleasure of singing there once. Mais oui!

So, get more Axel and Agent Colt at his website, and stay tuned for his upcoming books.Â  I’m hoping to catch up with AxelÂ  at Book Expo America so maybe I”ll send a pic of us together; SCORE!