6 Books for the Growing Activists in Your Family 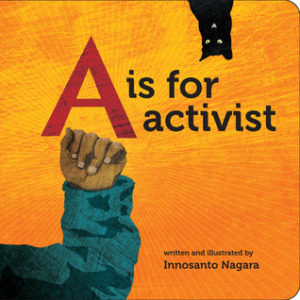 Â 6 Books for the
Growing Activists in Your Family

Do you consider yourself an activist? An activist is someone who pushes to make society a better place. Â There are many different types of activism; from animal and human rights to art to gardening. Whatever youâ€™re interested in, thereâ€™s probably a cause that could use your help. Â

The news lately is filled with people marching and protesting the inequalities that are important to them. Fighting for the underdog and helping others are good traits to encourage in children. Following are six books to light the fire of activism in your family.

1. A Is for Activist by Innosanto Nagara

…an ABC board book for the next generation of progressives: Families that want their kids to grow up in a space that is unapologetic about activism, environmental justice, civil rights, LGBTQ rightsâ€¦

I wish this book had been around when my kids were little. This is a great foundation book. This book is proof that if you see a need for a book, write it!

Get to know celebrated Supreme Court justice Ruth Bader Ginsburg in the first picture book about her….

Ruth Bader Ginsburg was the second woman appointed to the Supreme Court but her career as a lawyer started many years before fighting discrimination against women. Train your future Supreme Court justice with this title for the younger set. RBG is an inspiration to everyone.

3. I Am Malala: How One Girl Stood Up for Education
and Changed the World by Malala Yousafzai, Patricia McCormick

When the Taliban took control of the Swat Valley in Pakistan, one girl spoke out. Malala Yousafzai refused to be silenced and fought for her right to an education.

On Tuesday, October 9, 2012, when she was fifteen, she almost paid the ultimate price. She was shot in the head at point-blank range while riding the bus home from school, and few expected her to survive.

Instead, Malala’s miraculous recovery has taken her on an extraordinary journey from a remote valley in northern Pakistan to the halls of the United Nations in New York. At sixteen, she has become a global symbol of peaceful protest and the youngest nominee ever for the Nobel Peace Prize.

The takeaways from this book are many: how lucky we are to be born girls in this country, that education for girls is important, and that human life is important, to name a few. This brave young womanâ€™s story will encourage and enlighten.

4. How Dare the Sun RiseÂ by Sandra Uwiringiyimana, Abigail Pesta

Sandra was just ten years old when she found herself with a gun pointed at her head. She had watched as rebels gunned down her mother and six-year-old sister in a refugee camp. Remarkably, the rebel didnâ€™t pull the trigger, and Sandra escaped.

Thus began a new life for her and her surviving family members. With no home and no money, they struggled to stay alive. Eventually, through a United Nations refugee program, they moved to America, only to face yet another ethnic disconnect. Sandra may have crossed an ocean, but there was now a much wider divide she had to overcome. And it started with middle school in New York.

Hereâ€™s another one of those stories where you will shake your head in disbelief that girls are treated so savagely based on where they are born. Sandraâ€™s triumph over her nightmare is so inspiring.

5. The Hate U Give by Angie Thomas

Sixteen-year-old Starr Carter moves between two worlds: the poor neighborhood where she lives and the fancy suburban prep school she attends. The uneasy balance between these worlds is shattered when Starr witnesses the fatal shooting of her childhood best friend Khalil at the hands of a police officer. Khalil was unarmed.

Soon afterward, his death is a national headline. Some are calling him a thug, maybe even a drug dealer and a gangbanger. Protesters are taking to the streets in Khalil’s name. Some cops and the local drug lord try to intimidate Starr and her family. What everyone wants to know is: what really went down that night? And the only person alive who can answer that is Starr.

A fiction that has unfortunately played out too frequently in Black American streets. Starr becomes a reluctant activist on behalf of her dead friend. Youâ€™ll cry, youâ€™ll cheer with her. Why haven’t you read this yet? See the movie too!

Fred Korematsu liked listening to music on the radio, playing tennis, and hanging around with his friendsâ€”just like lots of other Americans. But everything changed when the United States went to war with Japan in 1941 and the government forced all people of Japanese ancestry to leave their homes on the West Coast and move to distant prison camps. This included Fred, whose parents had immigrated to the United States from Japan many years before. But Fred refused to go. He knew that what the government was doing was unfair. And when he got put in jail for resisting, he knew he couldnâ€™t give up.

Regrettably, America is not free from blame when it comes to denying basic civil rights. Itâ€™s hard to believe that America forced over 100 thousand people into internment camps. It wasnâ€™t until the late 1980s that reparations were made to the families and their descendants. Read this and be angry and make sure it never happens again in this country.

Dust off your library card and clear off your shelves, because your whole family is going to want to know more about activism after youâ€™ve finished these books. Then, go make the world a better place; youâ€™re never too young to start.