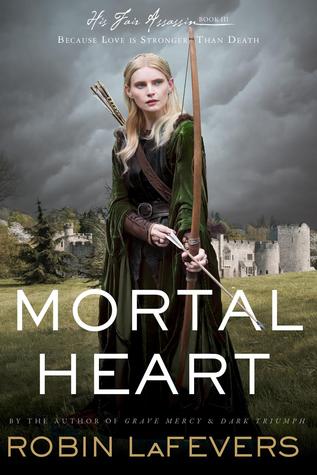 This Cybils finalist is part of a series. Now as you know, I’m not one to shy away from picking up a title in the middle of a series. To be sure, sometimes it can be confusing, but often the book does enough explaining that you can follow along rather easily. Given that Mortal Heart is part of a series, for judging purposes I am ok with suggesting it, however, I think that if you’re going to read this title, you’d prolly want to read the other book(s?) first.  Or be kinda confused in the beginning, but whatever you do, do you, boo.

So the characters live in an abbey and are training to be assassin nuns? I think. They worship the god of death, I think. That bit was a little tough to follow but whatevs.  The good bit is the main character, Annith, is angry. She’s angry all the time. And while I can’t really figure out why she’s so mad, it does make for good reading cuz you know she’s going to do some dumb stuff to get herself into situations.

Eventually Annith leaves the abbey and she runs into the Hellaquins. I have to admit this was the BEST bit about the story. These horse riders from hell (imagine the four horsemen of the  apocalypse) are fierce creatures and the leader guy kinda likes her. He follows her around like a puppy dog which is fairly amusing.  I don’t want to give anything away, but there are sieges, killings, politics, factions and strong kick ass girl characters.