X is one of the hardest letters in the alphabet to find a book for. Fortunately there IS a book I can use: 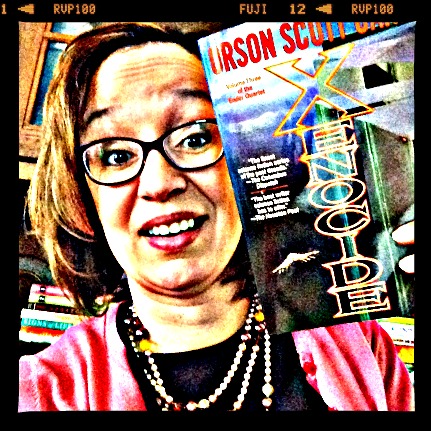 It’s Xenocide by Orson Scott Card! It’s part of the Ender’s Game series. Here’s a bit about it:

The war for survival of the planet Lusitania will be fought in the hearts of a child named Gloriously Bright.

On Lusitania, Ender found a world where humans and pequininos and the Hive Queen could all live together; where three very different intelligent species could find common ground at last. Or so he thought.

Lusitania also harbors the descolada, a virus that kills all humans it infects, but which the pequininos require in order to become adults. The Starways Congress so fears the effects of the descolada, should it escape from Lusitania, that they have ordered the destruction of the entire planet, and all who live there. The Fleet is on its way, and a second xenocide seems inevitable.

Don’t judge me. It’s late in the game and I’m exhausted. Two more days to go!

Can you think of a book that starts with X?

Well there is the Xanth series from Piers Anthony taht was a lot of fun.

—
Tim Brannan, The Other Side Blog
2015 A to Z of Vampires
http://theotherside.timsbrannan.com/

Loved the Ender series!
I posted “The X-mas Cat” and yes, it should have been Christmas. I didn’t get Xoe by Sara C. Roethle finished in time to review it.

I do enjoy reading Orson Scott Card, but I haven’t made it to Xenocide. I probably should so that I have a great “X” book on my “have read” list.

The boy read Ender’s Game last year and I’m pretty sure he picked it as his favorite read of 2014. Xenocide is on his list, but I don’t think he’s gotten to it yet. The series is on my TBR as well. One of these days I’ll get to it. Elle @ Erratic Project Junkie

Was going to do a search and then I read the first comment – Xanth! Of course!