There is so much to like about Salvage by Alexandra Duncan. 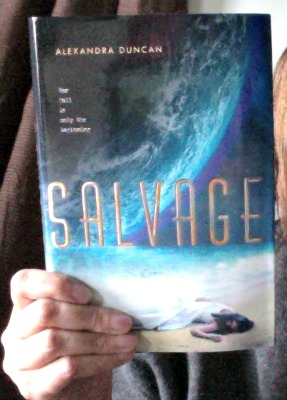 Salvage is a smart book. In fact I think the author is a librarian (yay!). But there is so much going on in the book it’s difficult to follow:

Salvage is a thrilling, surprising, and thought-provoking debut novel that will appeal to fans of Across the Universe, by Beth Revis, and , by Margaret Atwood. This is literary science fiction with a feminist twist, and it explores themes of choice, agency, rebellion, and family.

Ava, a teenage girl living aboard the male-dominated, conservative deep space merchant ship Parastrata, faces betrayal, banishment, and death. Taking her fate into her own hands, she flees to the Gyre, a floating continent of garbage and scrap in the Pacific Ocean.

This is a sweeping and harrowing novel about a girl who can’t read or write or even withstand the forces of gravity. What choices will she make? How will she build a future on an earth ravaged by climate change?

The book reminds me of The Passage by Justin Cronin. Oh sure it reminds me of The Handmaid’s Tale too, but this book is so bogged down by scientific facts and figures and information that you can get sidetracked or even disheartened. BUT, dear reader, if that kind of thing floats your spaceboat, then you’ll love Salvage!

One of the best bits about Salvage is that there’s the strong feminist current throughout: no matter what challenge Ava is given, she triumphs, she’s strong and she’s not going to let her shortcomings get int he way. And she has alot of shortcomings: primarily that she can’t read.

Another interesting bit about Salvage is the language. There is a puritanical pattern to Ava (and her people’s) speech that is interesting. It harkens back to the Scarlet Letter in the days ofÂ Goody Brown. Â Add to that speech pattern the fact that everywhere she goes, they have a completely different manner of speech. Some French, some Hindu, some, I don’t know what. It makes the book at times interesting and at times frustrating when you can’t figure out what the heck they’re talking about.

But India in a space age novel? FOR THE WIN!

Sadly, this was not a winner for me. And what is up with the cover? This is not a mermaid book. Ava kicks ass and takes numbers. Sort of. In a space ship. Wearing pants.

Readers, if this is your thing, then you will love it.

Is the book’s being bogged down by facts more about extraneous info, or is it woven in well?

It’s necessary to the story I think because you need it to understand the world she lives in. I think you should try it for yourself!

Usually if I the world building sticks out while I’m reading it’s because the author has over-researched or has too many details they want to get on the page. A perfect balance of story-telling and world building–for me at least–happens when the characters move through their world seamlessly. If I can learn about the world via the actions the characters take through it, that is perfect world building.

I loved it and didn’t find it bogged down at all by too much detail, but that’s me. But yeah, I HATED the cover. Makes her seem so passive which is so…not Ava. She looks dead on the cover.