Wanna hear me sing “Jesse’s Girl” by Rick Springfield? No? (sigh) I don’t blame you.

Who is Jesse, anyway, you ask?

Jesse is Jesse Wilson, author of The Night the Moon Ate My Room, a fun book for kids that I’m excited about.

Jesse Wilson is an author, motivational performer, illustrator, and teacher.A life-long involvement with theatre and film as both performer and writer began early, growing up in Hollywood, CA, where he performed in plays, TV shows and commercials. A graduate of the LA High School for the Performing Arts, Jesse traveled east to attain a BFA for theatre in the prestigious Juilliard School. Remaining in New York, and later Philadelphia, he developed material for his one-man shows, performed throughout the region. His most recent production, “Face the City,” written for high school and college audiences, combines visual and animation projections in a multimedia presentation of the artist’s journey to find themselves in the “real world.” “The Night the Moon Ate My Room!” written and performed with music for young audiences to experience self-discovery, is created with the support of The Kennedy Center’s Imagination Celebration and Pikes Peak Library District.

Coming soon this year, building upon the success of “The Night the Moon Ate My Room!” a series of empowering books for children, written and illustrated by Jesse Wilson, will be published under the title “Brilliant Mistakes!”

Here’s a bit about the book:

The moon was bright and full that night, bigger than I could ever even remember it.

Maybe because it was moving towards me… 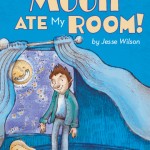 fter giving the worst violin recital of his life, and being laughed at by the entire school, the boy vows to never play music again. Later that night, when the moon swallows up his bedroom, it shares the secrets of being a true artist, helping the boy re-claim his self-confidence, overcome the pitfalls of perfectionism, and believe in his own dream.

Each of the five stories in The Night the Moon Ate My Room! is designed for young readers to experience the joy of self-discovery, valuable life lessons, and the adventure of turning their greatest dreams into reality.

How fun does THAT sound??

I know, right? As if that isn’t fun enough, read Jesse’s guest post and two chances to win!

Hopefully, after experiencing the performance of “The Night the Moon Ate My Room!” on stage, students at the schools that I perform and teach at will now begin to take risks in integrating music, theatre and technology (video/photography projection), and step outside of their comfort zone.  It’s their turn now! As a teacher and performer, my purpose is not simply to give information, but rather act as a guide and model for what the idea of life long learning really means.  So often we tell children that learning never stops, but fail to demonstrate that concept for them.

One of my goals as a performer and teacher for children is that students begin to see that every idea that ‘s floating around in their dream world can be brought to life through the integration of the arts.  Drama is no longer simply the performing of plays and musicals.  Music is not just performance of a written piece.  Art is not just paint on canvas.  These concepts are parts of a much larger experience looked at and examined up close in the classroom.  Students should be able to create dramatic and creative expressions of their own, as well as able to be participants in the creation of fantastic creatures, dramatic interpretations, movement, and musical expression that they might not otherwise be willing to experience.

In workshops that dovetail “The Night the Moon Ate My Room!” many extra shy students who are already technologically savvy will benefit “getting out of their comfort zones” as well.  They will be able to use one of their strengths, technological knowledge, to be an integral part of the classroom experience together.  Not everyone is inspired to be a performer, after all, and bringing technology into the drama and music workshop allows every student to play a part in a performance or a creative exercise.  Demonstrating for these students that technology can play a tremendous part in the creative process will allow them to step out of their comfort zone and think more critically about just how to integrate their talents into the process itself.  They will be able to demonstrate their creativity in ways that are meaningful and purposeful for them.

The whole idea is to get kids to think outside of the box, no matter what the approach is.  The jobs that they will be applying for later in life will utilize this creative thinking and the ability to integrate the ordinary in new and exciting ways to create something completely different.  The implementation of the arts in the classroom will also allow students to experiment with so many ideas safe, supportive environment, teaching them that taking risks and doing something out of the ordinary can result in a fantastic creation… no matter how it appears in a given medium.

My goal for children is that they become creative thinkers who are not afraid to do something out of the ordinary and challenge the status quo.

So here’s the deal: to win a free copy of Jesse’s ebook, comment as many times as you’d like to on this post.  Contest ends February 4th so that’s TWO FULL WEEKS to enter!

To win the grand prize,a  signed paperback copy of The Night the Moon Ate My Room along with an “11 x 15” custom illustration, enter the Rafflecopter contest below.

4 replies on “Guest Post by Jesse Wilson, author of The Night the Moon Ate My Room”

Pam, thanks for hosting Jesse!

I hope I win YAY