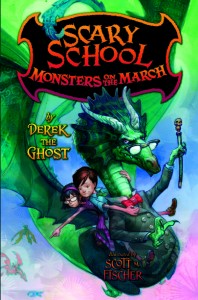 As winners of last year’s Ghoul Games, the students of Scary School are off to Monster Forest. School may be scary, but the forest has a few frights of its own, including:

And when Zogette follows Charles to Scary School, the Monster King and Captain Pigbeard raise their armies and chase after her. But the monsters have no idea who—or what—they’re dealing with.

In this clever, funny sequel to the frighteningly hilarious Scary School, Charles, Penny Possum, Dr. Dragonbreath, and all the students and teachers prove that scary monsters are no match for Scary School!

Now, go back and look at the brilliance of the colors in the cover illustrations! Who wouldn’t want to go to that school with Derek the Ghost?

This book drops June 26th, don’t wait to get it to add it to your summer reading pile!

3 replies on “Scary School #2: Monsters on the March”

Who wouldn’t want these? I love the cover! And the stories sound delightful.